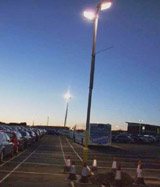 Airparks Birmingham is a secured off-airport car park, but close to the airport grounds. With over 18 years experience, along with CCTV, security fencing and 24 hour patrols, there is no safer place to leave your vehicle. Awarded Park Mark, along with the ISO 9001 2008 accreditation for the comprehensive management of their own sites, it is clear to see that operational standards are paramount.

Airparks is committed to providing the highest standards of service, and that also means making any improvements and upgrades to car parks to update security measures. In-line with this, Airparks has now invested in new floodlighting throughout the car park at their Birmingham site. This means, not only will you be able to see where your car is in the dark, but your car will be safer and clearly visible on monitored CCTV and during patrols.

If you're looking for somewhere safe to park your car during an upcoming trip, look no further than Airparks Birmingham.

ShortRun by Airparks Birmingham Friendly staff. Easy to find. Prompt bus and regular service. Bus stop A at the airport in Birmingham. Mrs Allen (5 out of 5)