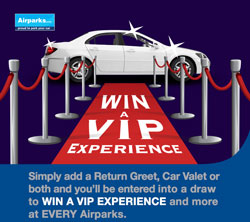 Travellers who booked Return Greet, a Car Valet, or both, between 1 December and 31 December 2012 were entered into a prize draw to win a VIP experience at their chosen Airparks site.

First prize at each Airparks car park is a VIP Travel Package which includes a night at an airport hotel, Meet & Greet airport parking for eight days, plus airport lounge passes and European travel insurance for four.

Our winners include Ms J Harley at the Glasgow site, who said: “I am delighted - I didn’t even realise I’d been entered into a draw!”

Super-convenient Meet & Greet airport parking is awarded to runners-up including Mrs P Raper at Gatwick Airparks: ”I was delighted to hear that I had won a prize, especially as it includes Meet & Greet.”

Third-prize winners walk away with our Gold Valet service for their car - a professional interior and exterior car valet to showroom standard. Miss H Newton is our Gatwick Airparks winner, and said: “The service from the ‘Airparks boys’ was outstanding, they were friendly and efficient. To collect my car fully valeted after a long flight was a delight! Thank you Airparks, I would definitely use your service again and recommend it to anyone."