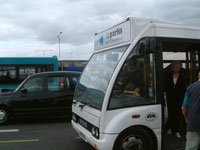 At Luton, the company is offering an 18 per cent reduction on its Airparks Luton Advance parking deal, from as little as £23.92 for eight days parking and £44.85 for 15 days. These fantastically low prices, equivalent to just £2.99 per day, are available until mid-July.

Sean Hagger, commercial manager at Airparks, said "This is a great time to book your airport parking at Luton and at Manchester with Airparks. We are proud to offer excellent price reductions on high quality airport parking throughout the UK."