Book airport hotels from as little as £79.00 per night*

*Prices vary depending on location, time of year, and when you book.


Airparks are dedicated to bringing you choice and great options to make your life at the airport easier. We are pleased to announce a new hotel on offer to you at the Liverpool John Lennon airport. The hotel is conveniently located opposite to the terminal building at Liverpool airport, meaning that you can wake up in the airport grounds and not have the long journey to the airport early in the morning. Airport hotels are also a great option if you have a late arriving flight and just want to relax. 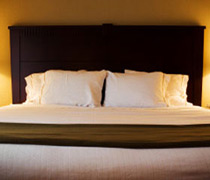 The Hampton by Hilton is a new brand concept introduced by Hilton (the second of it's kind to be built in the UK) and is available for stays from the 28th September 2009.

Room only packages (coded LPLHAM) are available from just £69.00 per room and is inclusive of English breakfast.

Parking packages (also including English breakfast) are also available from £84.00 for four days parking, £99.00 for eight days and £114.00 for up to fifteen days. Cars are stored on-site at the hotel or in a nearby secure compound (at the hotels discretion).


Transfers are not required as the hotel is within walking distance of the terminal building.

Airparks do not sell airport hotels, but are we pleased to work with our preferred partners Holiday Extras. Take a look today and book your room early for a great deal

Liverpool Airport Hotels are rated, on average, 4.3 out of 5 by 22 Airparks customers

Hampton by Hilton Liverpool Airport Easy to book park and stay at a better price than the hotel offered. Mrs Purser 28 Oct, 2021

Hampton by Hilton Liverpool Airport It was very efficient. Perfect for a trip from Liverpool airport Mr Breakenridge 20 Oct, 2021