Heathrow Airport consists of 5 terminals numbered 1, 2, 3, 4 and 5 and each of these serves a variety of destinations and airlines. Handling up to 90 million passengers per year, Heathrow Airport can get very busy so it is important to know your terminal before you arrive at the airport in order to avoid any stressful delays to your journey. There are also designated car parks for the different terminals, so make sure you check that you’ve got the right car park for your terminal before booking your airport parking.

Opened over 40 years ago, Terminal 1 at Heathrow Airport is home to the airport’s second largest airline, BMI as well as Lufthansa, United Airlines and a number of smaller European carriers. The terminal serves around 50 destinations ranging from Addis Ababa to Dublin. Car parking servicing this terminal includes Heathrow Airport Park 1 - Terminal 1

Terminal 2 at Heathrow is currently under construction and due to re-open in 2014 replacing the previous buildings which were the first to be opened at Heathrow in 1955. Destinations from Terminal 2 are likely to include Munich, Bangkok and Los Angeles.

Terminal 4 is connected to terminals 1, 2 and 3 via the Heathrow Cargo Tunnel and operates flights from airlines included in the Sky Team Alliance. Destinations from terminal 4 range from short haul flights to Paris and Amsterdam to long haul destinations such as Nairobi, Dhaka and Toronto. Parking nearby Terminal 4 includes Heathrow Airport Business Parking T4

Heathrow Airport has an international reputation as a busy and diverse UK airport. With such a wide variety of destinations served from Heathrow and nearly 100 different airlines operating from the 5 terminals it is easy to see why. 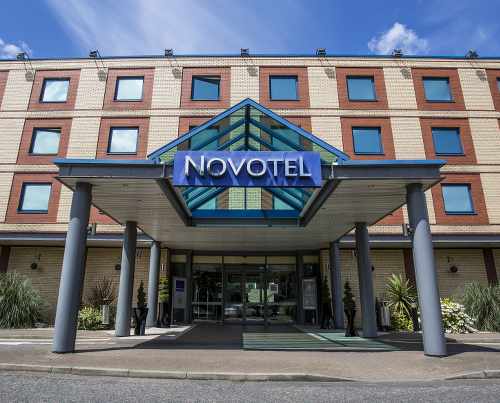 Add a Heathrow airport hotel to your booking

* This is an example price for adding a hotel stay to a Heathrow parking service (11 July 2021). Please note, the pictured hotel is an example and the price may not be applicable to this product.

Purple Parking Meet and Greet Heathrow We used “ Meet & Greet” service at Terminal 2 Heathrow airport.
We loved the fact that we didn’t have to wait at all on our arrival.
I called the company when we landed and by the time we received our luggage , the car was waiting for us!
Great job guys, well done! Mrs Elliott (5 out of 5)